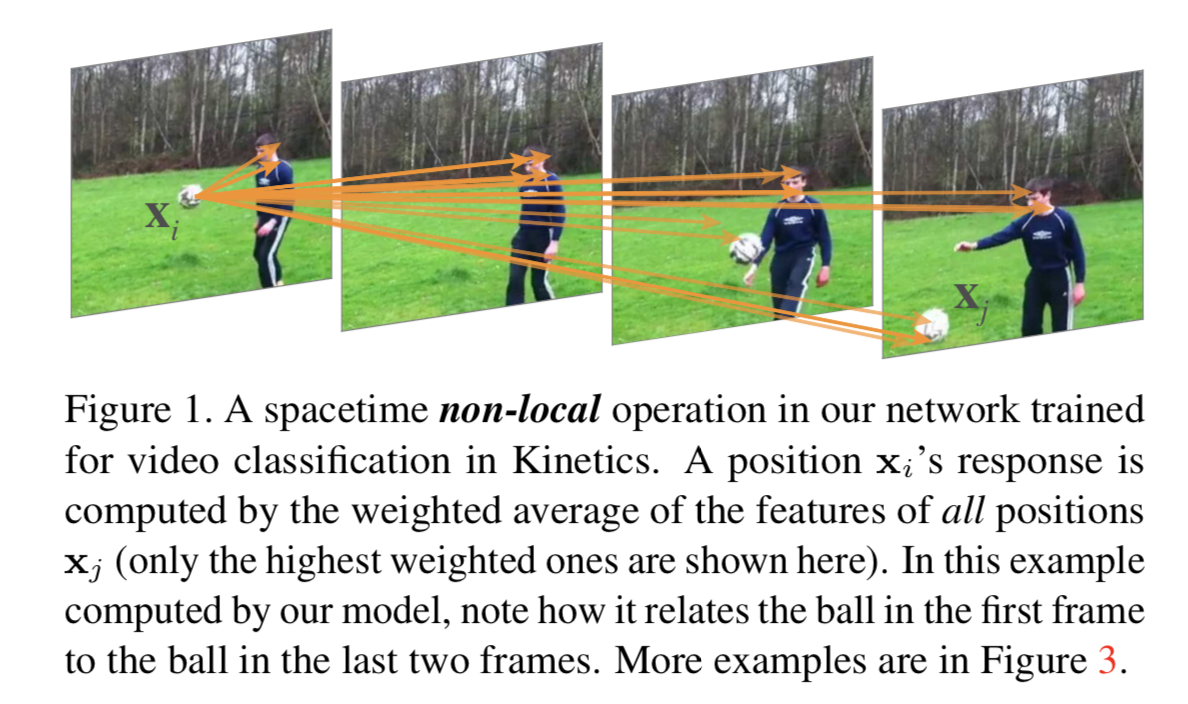 There are several advantages of using non-local operations:

We define a generic non-local operation in deep neural networks as:

Next we describe several versions of f and g

Interestingly our non-local models are not sensitive to these choices 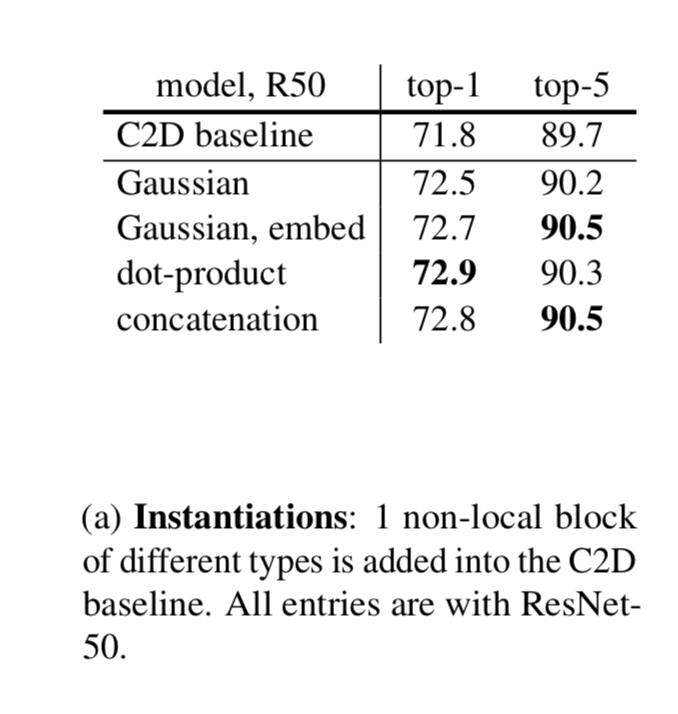 For simplicity, we only consider g in the form of a linear embedding

Next we discuss choices for the pairwise function f

We note that the self-attention module for a given i, $\frac 1 {C(x)}f(x_i, x_j)$ becomes the softmax computation.
Therefore self-attention is a special case of non-local operations in Embedded Gaussian version.
The attentional behavior is not essential in the applications we study

In this case, we set normalization factor as $C(x) = N$ where N is the number of positions in x, rather than the sum of f, because it simplifies gradient computation

We define a non-local block as: 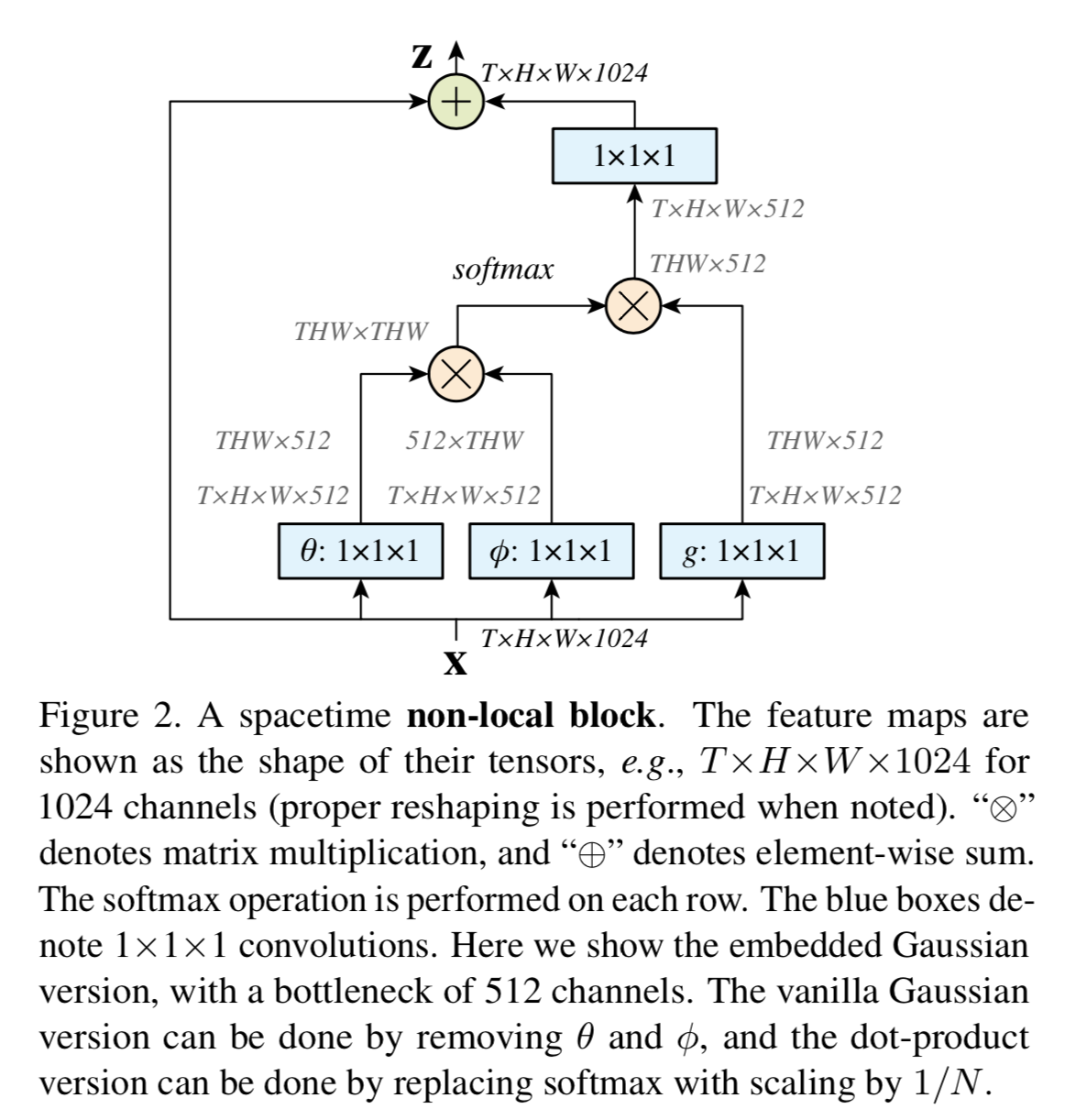 We further adopt the following implementations that make it more efficient

We can change x to a subsampling version $\hat x$(e.g. by pooling)

First we describe our baseline network architectures for this task, and then extend them into 3D ConvNets and our proposed non-local nets 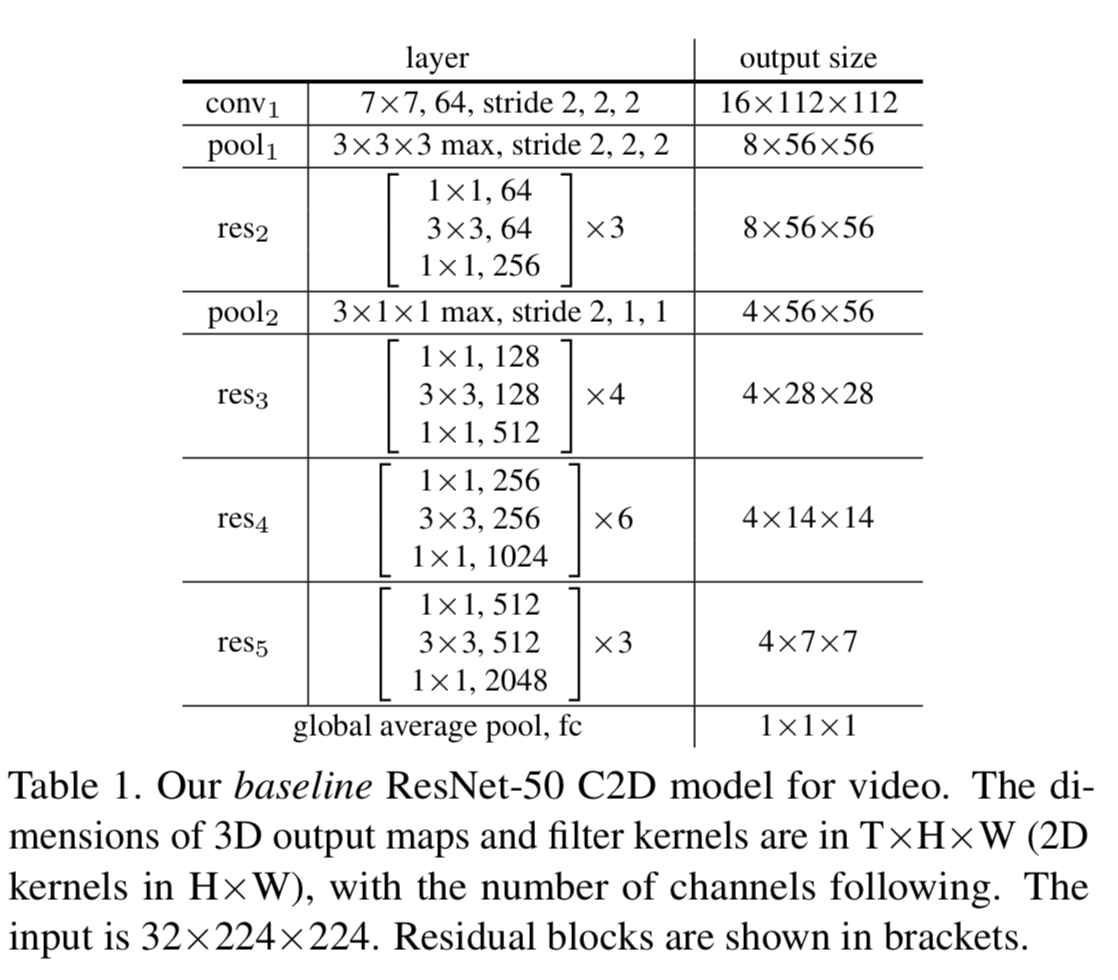 The only operation involving the temporal domain are the pooling layers

Initialize: each of the t planes in the t×k×k kernel is initialized by the pre-trained k×k weights, rescaled by 1/t

The implementation details are described in the next section

For the temporal domain, in our practice we sample 10 clips evenly from a full-length video and compute the softmax scores on them individually. The final prediction is the averaged softmax scores of all clips 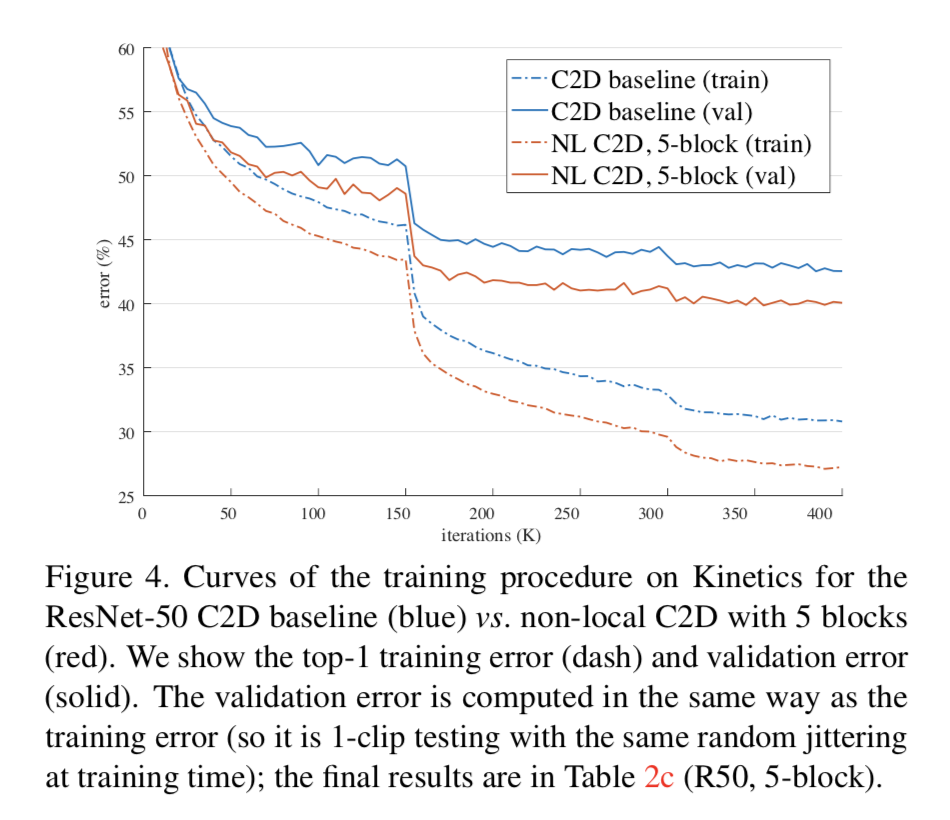 Our experiments show that the attentional (softmax) behavior of this module is not the key to the improvement in our applications; instead, it is more likely that the non-local behavior is important, and it is insensitive to the instantiations

In the rest of this paper, we use the embedded Gaussian version by default

Which stage to add non-local blocks? 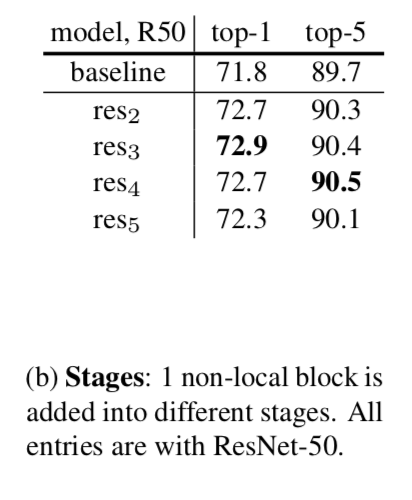 The improvement is similar

This table shows the result of more non-local blocks 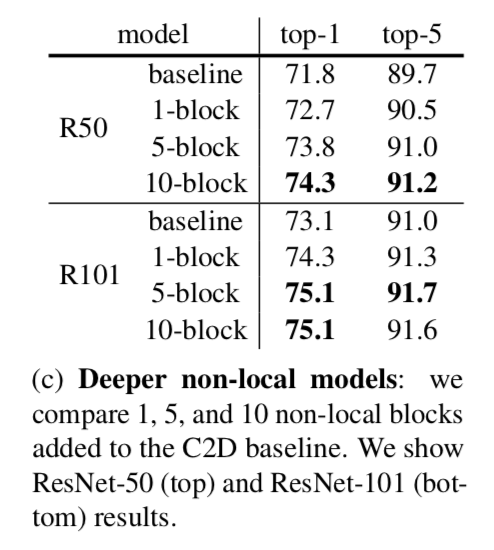 This table we study the effect of non-local blocks applied along space, time or spacetime 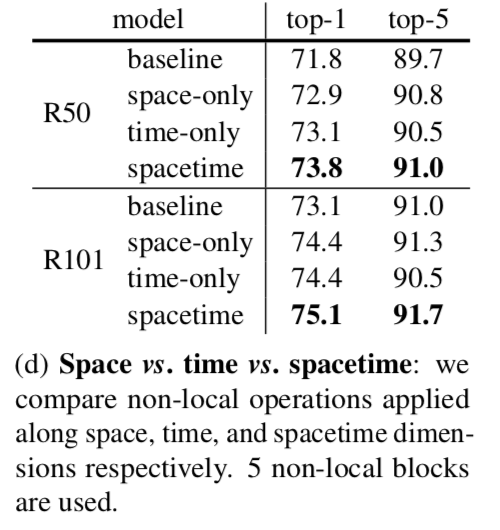 both the space-only and time-only versions improve over the C2D baseline, but are inferior to the spacetime version 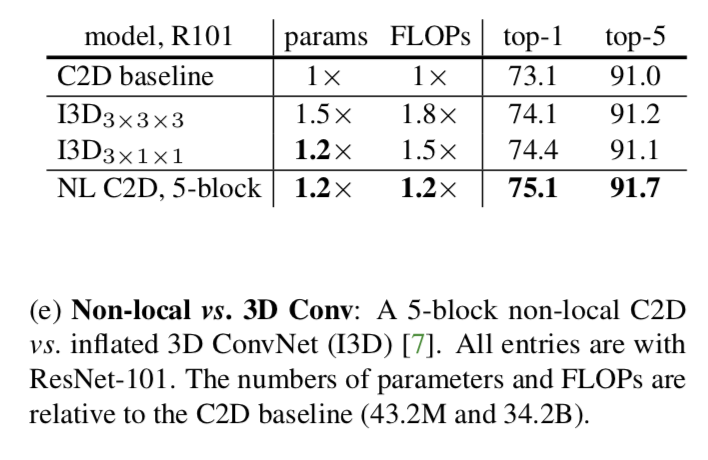 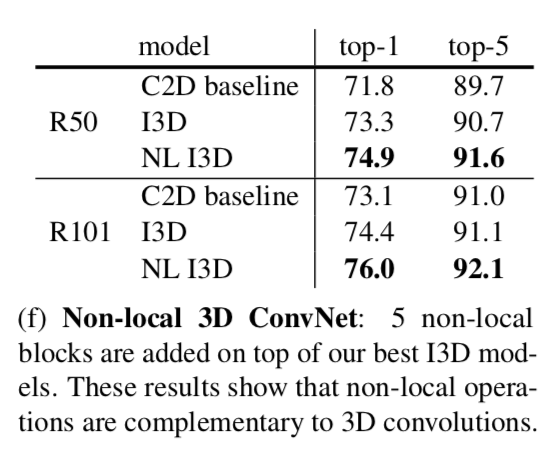 Shows that non-local operations and 3D convolutions are complementary

Finally we investigate the generality of our models on longer input videos. We use input clips consisting of 128 consecutive frames without subsampling 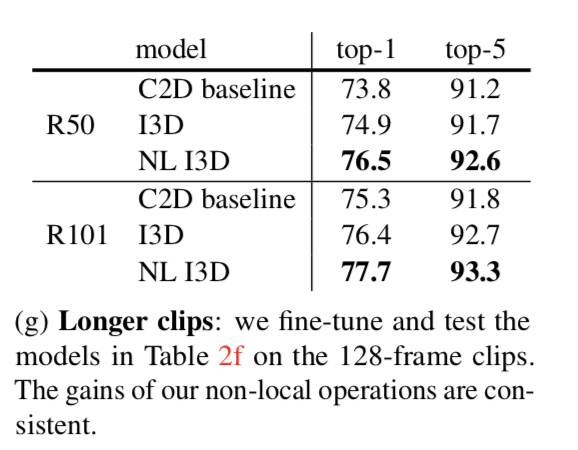